We all know this to be true: to make serious dough as a writer means a) writing a lot; and b) writing well. This latter consideration is why TKZ has been around as long as it has (and we’re proud to say we are once again a Writer’s Digest Best 101 Websites for writers). We care about our craft and love helping writers get better. 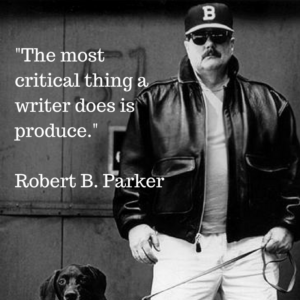 As for writing a lot, most of you know that my best advice is writing to a quota. I’ve done this for 25 years. I keep track on a spreadsheet my daily, weekly, and yearly output. I used to go for a daily quota, but would feel guilty when I had to miss a day for some reason. Now I use a weekly number, and divide that by six days (I take one day off to recharge). If I miss a day I can readjust and add more words to the other days.

I’ve also made a study over the years of writing efficiency. I don’t like wasting time when I write. I want to get the words out and stories completed. Here are some of the things I do. Maybe a few of them will help you, too.

Sometimes you can sit down at the keyboard and pound out 1,000 words or more in a state of delightful flow. Other times writing seems like walking in snowshoes through the La Brea Tar Pits. On days like that, it feels daunting to contemplate 1,000 words. So I break it down into writing sprints.

Then rest. Catch your breath. Walk around a bit. Then come back and do another 250.

Repeat until your quota is done.

Remember this rule, too: when you write, don’t stop to edit. Keep going. Which leads us to #2:

Often in your writing you’ll come to a spot where you’ll need to spend time on things like research, coming up with a name for a new character, specific details of the setting, and so on. When I come to such a point I put in a placeholder (three asterisks ***). That way I can keep on writing and later come back during editing time and fill in the info.

I might be writing along and put in: ***POLICE PROCEDURE. This tells me there’s a specific detail I need to research on that point.

READ ALSO:   7 Tips to Get Your Novel Written — Faster

Or a new character comes in. I might use a descriptive word and do the name thing later: ***SNARKY. My placeholder brings me to this spot, I created the name, then do find (SNARKY) and replace with the name.

This keeps me writing “in the zone.”

If you take just 2 -3 minutes to “scene storm”—brainstorming with a scene goal in mind—you’ll write a scene with an organic connection to the overall story and, as a bonus, save time in the revision stage. Yes, you’ll need to edit your immortal prose, but it won’t necessarily be a macro edit. In other words, you usually won’t have to throw out entire scenes and write new ones.

First, what is the viewpoint character’s OBJECTIVE in the scene? What does she want? If she doesn’t want anything, don’t even think about writing that scene.

The objective can be external or internal.

Examples of an external objective:

Examples of an internal objective:

Next, come up with a list of potential OBSTACLES to gaining the objective. This is where conflict, external and/or internal, develops. Obstacles can come from another character who has an agenda directly opposed to your Lead. Or it can be something physical, like the bridge is out or the car won’t start.

Finally, what will be the OUTCOME of your scene? Success or setback? Usually the latter makes for greater suspense, but occasionally you’ll want a success…so long as it leads to more trouble!

My favorite example of this is from the movie The Fugitive. Remember when Richard Kimble is posing as a hospital custodian? He’s on the trauma floor when a doctor asks him to help by taking a kid on a gurney down to an observation room. But he knows from what the kid is saying and a sneak look at the x-rays that the kid needs to be operated on, stat. In the elevator he changes the orders and delivers the kid to an operating chamber, saving his life. Success! But he was observed looking at the x-rays by the doctor, and she confronts him and starts calling for security. Now he has to make an escape. More trouble!

READ ALSO:   Motivational Tricks To Keep You Working On Your Manuscript

So just a few minutes considering Objective, Obstacles, and Outcome will have you writing faster because you know where you’re going.

Now and then I like to riff on an emotional moment within a scene. When I come to a place where a strong emotion is felt by the Lead, I write 100 or 200 words without stopping, finding various ways to describe the emotion. I might use metaphors, memories, smells, colors, whatever comes to mind. I write these really fast, letting the intensity of the moment drive the words.

I analyze later, and may end up using only one or two lines. This may, at first blush, seem like inefficient writing, since I toss out a lot of it. But in this case it’s worth it, because the lines I use will be some of the best writing I’m capable of.

Wait, what? You don’t have your next project ready to go? You need to be more like a movie studio! You have one novel in production (your WIP). But you also have your next “green-lighted” project, the one that will be given your full attention when the current work is finished.

If I hit a snag in my WIP, I let it rest and go over to my next project. I have it set up in Scrivener and look at my scene cards on the corkboard. I’ll choose one that calls out to me and write 250 words or so for that scene. Then back to my WIP.

In addition to your WIP and your next, you should also have several projects “in development.” Everything from one-line ideas to elevator pitches. Give these some thought every week in a dedicated “creativity time.” See my post on “Chasing a New Idea.“

By writing just the dialogue—and by that I mean no descriptions or action beats—you can generate a lot of words that will help develop the scene. You go back later and insert the other stuff. I know what my scene is going to be about (via scene storming). By just writing dialogue I allow my characters to improvise. It’s fun to hear what they come up with.

Hey, it worked for Balzac. Of course, his 50-cup-a-day habit led to his untimely death from caffeine poisoning. But he did produce the work!

READ ALSO:   Please Steal These Ideas! 30 Things to Write About

My tongue is firmly planted in my cheek, of course. Well, a little. I really mean this tip to be: take care of your brain. Get enough sleep. Exercise. Eat salmon and blueberries, nuts and dark chocolate.

And yes, “the science” says that moderate coffee intake is good for the gray cells, and for other things like reducing the risk of Type-2 diabetes and liver disease. So enjoy a cup or two of joe as you write. Your brain will thank you as your fingers fly across the keyboard.

Connecting with readers is one of the most important aspects of being a writer. Brush up on the specific strategies that will make you successful.

The Five Hats of Self-Publishing

The choice to publish your book yourself requires you to do much more than just write your book. You’ll also need to be prepared to perform these five functions.

How to Create a Convincing Fictional Technology

Sci-Fi has always influenced technology. If you’re planning on crafting fiction tech, be sure to make it something that readers will not reject.

8 Great Reasons to Write Your Book